Gen Z Will Be the Ultimate Pot Consumers


No replies to this topic

Gen Z Will Be the Ultimate Pot Consumers

(Bloomberg) -- America’s Generation Z is coming of age in a whole new world of weed.

This large cohort, which already has big-time spending power as the oldest age into high school and college, is formulating its consumption habits at a time when marijuana muscles into the mainstream. Unlike their Gen X or Boomer parents, Gen Z shoppers have only known a time where cannabis is edging toward acceptance, with California voting to legalize medical use in 1996—a year before even the oldest Gen Z consumers were born.

“They’re growing up in a world where cannabis is completely normal,” said Anna Duckworth, co-founder and chief content officer of Miss Grass, an online cannabis accessories shop and publication based in Los Angeles. “Everybody will know how to roll a joint and there won’t be any shame talking about it.”

Weed is already big business in the U.S., with legal sales passing $10 billion last year amid easing regulations around the country. And it will only get bigger as the generation that’s twice as likely as the average American to use cannabis begins earning a steady paycheck. It’s always hard to generalize about an entire age group, but early signs suggest it will be a generation of marijuana consumers, embracing legal pot to unwind or treat ailments like insomnia and anxiety as perceptions of a drug once seen as a vice for lazy stoners get turned upside down. 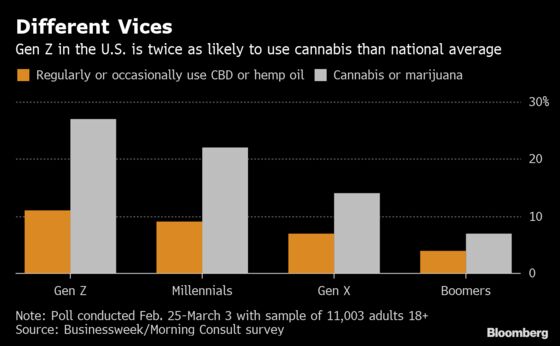 On a recent Friday in Los Angeles, 21-year-old student Baruch Levin was near the main UCLA quad trying to recruit students to join his fraternity. Levin grew up in Southern California and while most of friends in high school smoked weed, he waited until he was 18, paranoid from his dad’s warnings that it would make him “dumb.” Prior to California’s recreational legalization in 2018, he had a friend with a medical card who could get it. Now Levin buys it for himself, including through the popular Eaze delivery app.

He was comfortable discussing marijuana, but there are still stigmas: While he often talks to his parents about drinking, he typically doesn’t mention pot. “I think it will take one more generation,” he said. “We grew up with the stigma from our parents.”

Typically, the age to buy legal pot is 21. That means that only a tiny fraction of Gen Z—who are roughly ages 7 to 22—are currently part of the legal weed economy. But with each year that passes, more and more Gen Z consumers will be able to light up. In the first few months of last year, Gen Z accounted for just over 1 percent of sales in the legal market. But by this year's April 20, the pot industry’s unofficial holiday that has become a kind of Black Friday for cannabis, at least three times more of them will be able to participate legally, according to Headset, which tracks cannabis sales.

Corporate America is taking notice. In addition to the marijuana firms in Canada, where pot is now legal nationwide, there are a handful of so-called multistate operators in the U.S. that are now among the most valuable cannabis companies the world. They're opening stores and cultivation facilities across the country in a race to develop national weed brands.

Packaged food and beverage companies are also studying the industry, trying to figure out how to market their products to this newly relevant group of consumers. They’re also pondering how cannabis might work as an ingredient, with companies from Coca-Cola Co. to Hunt’s ketchup owner Conagra Brands Inc. both studying CBD, a compound that doesn't get you high.

To be sure, it’s not just Gen Z that’s increasingly embracing cannabis. Over the last 20 years, the percentage of Americans who support legalization has doubled, and more than 60 percent now have access to some form of legal weed, with medical programs even popping up in more conservative states such as Utah and Oklahoma. Industry observers point to the national conversation about the medical benefits of pot as a key turning point for public perceptions of the plant. Still, only 7 percent of Baby Boomers use it, a survey by Bloomberg and Morning Consult found.

Duckworth, a millennial, takes some of her meetings at a dog park in the Los Angeles neighborhood of Venice and she’s often touting a joint—to her, it’s no different than meeting a professional contact for a drink after work, only there’s no risk of a hangover. And that’s a big part of it. Younger Americans’ love of cannabis appears to be coming, at least in part, at the expense of alcohol, which saw volumes decline in the U.S. in 2018 for a third straight year. That’s primarily due to sinking beer sales, as younger Americans view marijuana, broadly speaking, as a healthier option, free of carbs, calories and the next day’s headaches.

Related: Fraternities Pivot to Soda Water, and Big Beer Has a Problem

That’s the case with Angelica Bishop, a UCLA transfer student with a part-time job at a law firm and a 3.9 GPA who grew up in California. At 23, she’s right on the cusp between Generation Z and millennials. With work and school, Bishop’s busy most days from roughly 8 a.m. until midnight. She gets high before philosophy class—she said she didn’t think this would work if she were majoring in, say, math or biology—and said it helps her “think about things like existentialism without barriers.”

“When it comes to alcohol I’m really turned off,” said Bishop, who uses a vape pen to get her buzz. “If you drink too much you end up in the hospital with alcohol poisoning. If I smoke too much, I sleep really well.” 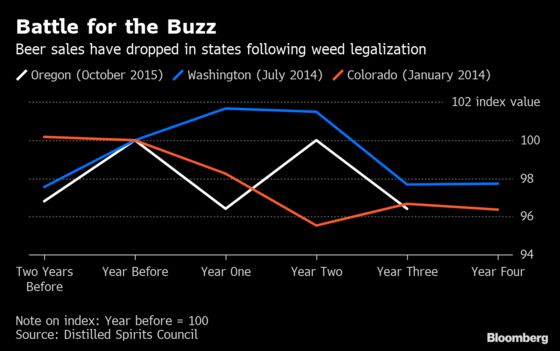 Americans are getting more introverted, a lifestyle the fits well with cannabis, according to John Dick, who runs the data and polling firm CivicScience. Going to the bar doesn’t sound as appealing to younger consumers when they can stay home, watch Netflix, scroll through Snapchat and order food for delivery, he said. Dick found a strong correlation between Americans who had reported using CBD, the hemp-derived compound that doesn’t get you high, and survey respondents who said they would prefer to watch a movie at home, rather than go to the theater.

“We’re realizing that deep down we’re introverts,” Dick said. “You don’t need rocket science to figure out how that’s going to change things.”

High school and college students smoking weed is nothing new, but with more discrete products—like vape pens and edibles—now available, and with the legal risks diminished, there’s less reason to give it up as adulthood beckons. In fact, studies suggest Americans who smoked when they were younger in legal markets are not aging out of cannabis like past generations.

For Gen Z, the assumption is that more and more states, if not the federal government, will legalize marijuana in coming years, opening up the market even more. The stigma is also expected to continue dissipating as the generation of Americans raised on reefer-madness panic ages. And while weed might not be right for a wedding or night out with co-workers, the expansion of the products available could eat into alcohol’s stranglehold as America’s top choice for cutting loose.