6 replies to this topic

Welcome to the Vegan Soil - Principles and Methods thread.

I Decided it is time for those of us on the Vegan path to have our own corner of the living web here at GreenPassion.

I will not be leading this thread in any manner

I simply wanted a thread for those interested and utilizing the common core of Veganic gardening. Some people grow Vegan gardens while never even realizing it and others like myself resort to no other methods due to personal choice and philosophy.

No Bullshit and no poop of any sort allowed in either the dialogue or dirt for what its worth here in this thread please and thank you . No bones or blood or any other animal derived products or material allowed.  I do allow room for the insect  and microbial world to work their wonders,but nothing else is allowed to defecate in my soil. Animal feces and matter is strictly for the great outdoors when it comes to my lodge and grow rooms. Poop free tree growing while taking advantage of earths botanical biodiversity and minerals.

Some of us grow  with Veganic soil blends for the principle value of Vegan philosophy and some are not in tune with this aspect. This type is commonly accepted as the  secondary type verses a primary Vegan grower who believes in the core of the Vegan philosophy. The secondary Vegan grower usually seeks to remain free from pollutants and trace drug and chemical residues found all too often in farmed animal waste and matter while taking advantage of the botanical worlds biodiversity. Nothing wrong with this type either as both types of Vegan growers can learn from another while sharing the common principles and methods.

With all due respect, lets keep the modern day weed superstars of this new Industry out of the context along with the commercialized items some are marketing for cannabis growers. No need for sales pitches here or inflated egos. Let the plants and the dirt speak for itself please while we all share our own thoughts and methods...

Compost , Compost,  Compost I cant stress more then anything how important this really is when speaking  about Vegan soil. The same applies to most other Organic methods as well depending on a few variables. A wise grower knows that the most important aspect of Vegan soil is quality compost and well decomposed compost. Some will take this further yet by mixing compost & humus with decomposing green compost. The two work well together from my experiences.

Vegan soil is based on Compost and the rest of the biodiversity and plant mass utilized as bulk media is up to the individual as well as regional availability. This thread hopefully in time will become very complex. We know that we have many hybridized vegan approaches and method that can be discussed openly here and I welcome any and all even if its not of the norm. Almost as many vegan methods exist as their are types of Cannabis when one really breaks the Vegan routes and methods down.

I again reiterate, will not be leading this thread though even though I will moderate it and add as much literature and links as needed to get the ball rolling initially or when stuck.....Thanks again for any and all contributions in advance. Everyone is welcome here and we can all learn from one another if we keep our minds open to others methods and approaches to growing this sacred plant we all know and love....PeacePipe

A Good Compost Is At The Heart Of Veganics

Healthy soil is full of living microorganisms which must be nourished and replaced in order to sustain our food supply; adding compost does both. Compost consists of decomposed plants reduced to their elemental ingredients by billions of soil organisms. The resulting spongy, moist substance is called humus, and this is the lifeblood of productive soil. When added to soil, a compost rich in humus builds soil structure and texture, holds moisture, allows drainage, slowly releases nutrients, moderates soil temperature, encourages beneficial earthworms, and suppresses soil-borne diseases.

Master Gardener Howard Scheps describes a good compost as approximately two-thirds brown material (dry leaves, dead plants, pine needles, and straw) and one-third green material (grass clippings, non-woody garden prunings, spent organically grown flowers, and fruit and vegetable garden scraps). He suggests applying half an inch of soil between layers of brown and green material to "get the compost going." These items are so easy to come by! If you live in a house with a lawn and a few trees, then you have access to everything you need.

Organic gardeners do not typically add flesh to compost, but veganic gardeners go one step further by excluding all animal products such as manure, egg shells, bone or fish meal, and dried blood. A veganic compost can include fruits, vegetables, grains and legumes. Anything left at the end of the day can go in the compost, such as coffee grounds, carrot greens, a watermelon rind, or the remains of a tofu lasagna. Scheps does not recommend dumping oil on the heap or adding food that is too sugary, as these items do not benefit the soil. He also advises against adding large quantities of salt as it could leach into groundwater.

Organic gardener Eliot Coleman found that hay can be effectively composted, although the timing of the cutting of the hay is a significant factor in how well it ultimately breaks down. He also discovered that a sprinkling of finely powdered clay helps it decompose. Anyone interested in the details of Coleman's research on the composting of hay can consult his book The New Organic Gardener.

Veganic farms may include "hinterland" which Bonsa describes as land used as a source of nutrients and organic matter separate from that which is used to grow food. Examples include a forest, hay field, or field of grass. The home veganic gardener will most likely find everything needed right on the property such as grass clippings, fallen leaves and other outdoor debris.

Thanks for this PP, I heard of a guy growing plants just to use to feed his plants.  Holy cow I am far too lazy for that, but I like the veganic idea and keeping industry out of nute recipes!  Good show.

Then I think I would like to talk composting!

After a series of piles for our scraps, we went a bit further.....

We started with a compost tumbler, two bins, room for a small wheelbarrow under....

This can be used to blend compost for specific plants,, acid loving or base loving mixes. Just rotate daily, one of the few areas of my garden where shovel is not required!

This summer plans include three compost miles made from pallets similar to this behind our main garden. 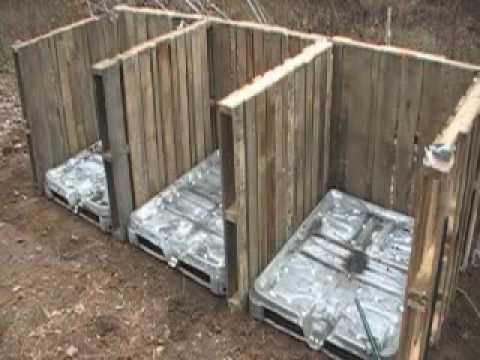 I have started an outdoor grow, small scale only 5 plants, but I noticed one plant that is on a more sandy part of the garden has some nutrient definicency. What would be a good way to feed her some extra growing power? I have these dried manure mix but this will takes some time to get to the roots. Is there an organic nutrient that can be used in water? What would yourecommend?

You Can use a foldage feed and feed her that way . Had to do that  cause of a root problem. you Can cut in the top 6" of that sandy soil with top soil with vermiclite in it. Vermiclite will hold more water. Cover the top of the soil with a mulch or plastic to help hold the water and feed in the soil longer.That's about all I got. hope it helps. Peace

Do you have a list of useful items to add to this compost?

Back to Organic Growing